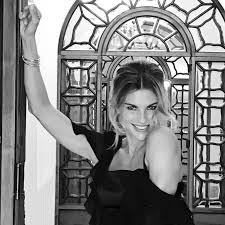 Martina Colombari was born in Riccione in 1975. In October 1991, after having been elected Miss Italy, she was called by the famous international modeling agency Riccardo Gay Model Management and she is included among the top international models of the time. She walk the catwalk for Giorgio Armani, Gianni Versace, Blumarine and Roberto Cavalli, and many others. Thus began a twenty-year career in fashion, which led her to work with the greatest photographers in the world and the most important fashion magazines. At the same time she performs on television with the role of co-host in various programs Un disco per l’estate, Vota la voce, Super, Juve centus, Controcampo (nel 1998). After studying diction with actress Giorgia Trasselli and acting with Beatrice Bracco, in 1991 she made her debut as an actress in the film Abbronzatissimi (directed by Jerry Calà), followed in 1998 by Paparazzi (directed by Neri Parenti), and then in 2000 Quello che le ragazze non dicono (directed by Carlo Vanzina), and in 2001 She (directed by Timothy Bond). From 2002 – 2008 she made her debut as a television actress in many TV series, such as Carabinieri, Diritto di difesa, Trust me (directed by Gianni Lepre), and the TV movie Canale 5 VIP (directed by Carlo Vanzina). In November 2010 she signed the photo exhibition “Martina_invisibile”, self-portraits taken by Martina that are exhibited in Milan at Spazio Forma on a project by Settimio Benedusi, with Dennis Curti as curator. On 16 February 2011 the autobiographical book “La vita è una” is published by Rizzoli, written in collaboration with Luca Serafini, with subtitle “From Miss Italy to volunteer in the heart of Haiti, the extraordinary adventure of an almost normal girl”. In 2014 she released the film ” Bologna 2 agosto – i giorni della collera” directed by Giorgio Molteni with Giuseppe di Maggio and Lorenzo Flaherty. She stars in the musical “Saturday Night Fever” at the National Theater of Milan (2012-2013) and in “The Best of Musical” – National Tour 2014. She is an ambassador for EXPO 2015 – Feeding the planet, energy for life. Since 2007 Martina is a volunteer on the front line and testimonial for the Francesca Rava NPH Italia foundation.