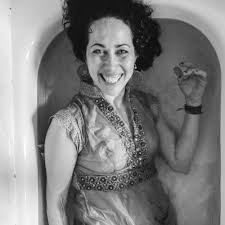 Multi-instrumentalist (charango, bass, vocals), singer-songwriter, and LGBT activist. Born and raised in Los Angeles, she found her musical calling in Italy, which remains a second home. After graduating Berklee College of Music she worked in Hollywood recording studios with Primus, Rage Against the Machine and Elliott Smith and countless others. As Honeybird she crossed the world, bringing her music around Europe, Latin America, Canada and the US. With honeybird & the birdies, she performed at Primavera Sound (Spain), Eurosonic (Holland), Primo Maggio (Italy) and Cherchez La Femme (France). In 2015 she recorded a solo album Out Comes Woman chronicling her coming out experience, produced by Marc Urselli (John Zorn, Laurie Anderson, Mike Patton), including concerts in the USA. 2016 saw two tours and an EP release (WM) with Honeybird & The Monas. In NYC she received the steve ben israel commission to create a yiddish pacifist ritual for BRIC; an invite to present Bi at the Brooklyn Museum for Women’s History Month; and a prestigious invite to perform at the US White House for the Bisexual Community Briefing. She spent much of 2016 touring Europe with popular Italian rock band Tre Allegri Ragazzi Morti, playing charango, guitar and vocals in an extensive summer and winter tour.