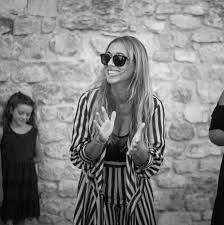 She traveled the world, lived in New York, Rome and Milan, but she has always been linked to her Tuscany. She worked in the entertainment world for 20 years — as an organizer of events, she was the road manager of Giorgio Panariello, she worked for important television producers and as a press office for Rai Uno. Now, grown up, she pours her head and heart only into projects that she likes; from a musical event to a television format passing through a documentary or a short film.