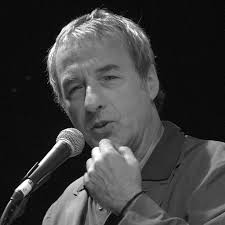 David Riondino is an Italian singer-songwriter, actor, director and writer. In 1979 he opened the historic Tour of De André and PFM. Among his most famous hits. Maracaibo, cult piece of the summer ’81, and the character of Joao Mesquinho. From his debut, beyond music and poetic writing, he tirelessly explores the theater (he has worked with Paolo Rossi, Sabina Guzzanti, Enrico Rava, Stefano Bollani and many others), the cinema (he worked with Marco Tullio Giordana, Gabriele Salvatores, beyond to direct the films “Cuba libre – Velocipedi ai tropici”) the radio (among other programs he conducted, “Il Dottor Djembé”, and “Vasco de Gama”) and television (“Maurizio Costanzo Show”, “Quelli che il calcio “,” A tutto volume “,” Velisti per caso” and “Una poltrona per due”). Among his books we mention Rombi and Milonghe (Feltrinelli, 1993) and, illustrated by Milo Manara, Il trombettiere (Magazzini Salani, 2012), Lo Sgurz (Nottetempo, 2016). Documentarist, has shot and produced various works on improvisation in verses in Cuba, “Shakespeare in Havana”, in 2010. Among the most recent works: “Bocca baciata non perde ventura”, a cd with 12 ballads from Boccaccio’s Decameron , “Il Bolero come terapia”, arranged by the guitarist Claudio Farinone, for an organic title of Latin Jazz.