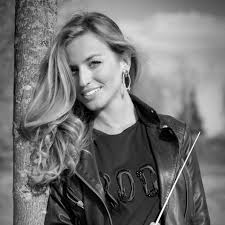 Pianist and composer born in 1990, Beatrice Venezi is the youngest Orchestra Conductor of Europe. She currently directs the New Scarlatti Orchestra of Naples, and she is Assistant Conductor of the First National Orchestra in Armenia and Principal Guest Conductor of the Puccini Festival. She graduated in piano under the guidance of the Argentine pianist Norberto Capelli, and perfected with the Masters Lucchesini, De Maria and Balzani. In 2005 she won the 1st overall prize of the “R.Zucchi” National Piano Interpretation Competition and in 2006 she won the 4th edition of the International Competition for Young Musicians “R. Zanuccoli. Among the numerous awards, in 2017 she won the historic Scala d’Oro award. Il Corriere della Sera reports she among the 100 women of the year 2016 and reconfirms her by including Beatrice in the 50 people in 2017 that worldwide have distinguished themselves for their professionalism and have been revolutionary, resilient, anti-conformist, pioneer, paladins of femininity, creativity and innovative resources. In 2018 Forbes features Beatrice in the list of 100 young leaders of the future: Great passionate music at 360 °, from classical to electronic, she fights for the diffusion of the opera in an accessible and captivating way. Always on the front line, to let young people discover classical music – she is also Principal Conductor of the Scarlatti Orchestra Young. The social dimension of her music has an important message of openness and innovation, thanks to her career in the major theaters of the world, even in very conservative countries. Through her role as Assistant Conductor of the State Youth Orchestra of Armenia, Beatrice was the first woman on the podium to receive public appreciation and esteem for her commitment to the eradication of any discrimination against women. She is ambassador of Terres Des Hommes in support of the girls’ InDifesa campaign.