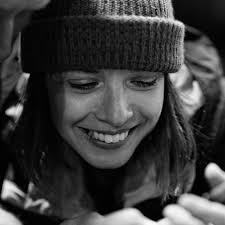 Laura Jansen is an award-winning Dutch/American singer songwriter. Her own music has taken her around the world collaborating with artists such as Armin van Buuren, Keane, Snowpatrol and many others. Her life took a remarkable turn when she was confronted with the current refugee crisis in her hometown of Amsterdam. Compelled to act, she volunteered locally with new arrivals and the stories of those she helped led her to travel to Lesvos, Greece where the humanitarian crisis was in full effect in 2015. Together with her friends she cofounded Movement on the Ground, an NGO that has been active full time in the refugee camps in Greece providing humanitarian support of all kinds. Laura stayed on Lesvos for 2.5 years working on implementing immediate support and the longer term goals of Movement on the Ground. Movement on the Ground believes in care that encompasses sustainability, dignity, healing, growth and community. Laura is currently working on her third studio album as well as a book chronicling her personal experiences on the island. She continues her role as advocate for Movement on the Ground through storytelling and music.