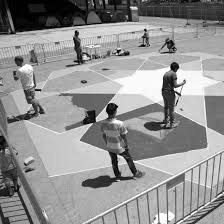 To celebrate the opening of The Student Hotel in Florence, the United Painting Crew was invited to create a colorful painting project on the floor of the buildings courtyard. They are part of Favela Painting, which has been creating large community art works in the slums of Brazil and all around the world for more than ten years. They always work together with local inhabitants to reimagine their neighborhood, to build bridges, tell stories and create opportunities by making stunning visual interventions in the most unexpected places. In 2014 Favela Painting returned to Europe to start setting up projects for refugees. They started the United Painting Crew and created several paintings in the Netherlands, Sweden and Greece. Now – together with The Student Hotel – the project also sets foot in Italy. Currently they are also setting up the Favela Painting Academy which aims to study the impact of their work and share their learnings with the rest of the world. The painting in Florence is made in collaboration with Il Cenacolo, a Social Cooperative established in 1991, focusing on social inclusion, integration of vulnerable groups and empowerment of disadvantaged people. As one of the main actors in Tuscany for the management of reception and integration services for refugees, asylum seekers and unaccompanied foreign minors, Il Cenacolo has established strong collaborations with NGOs and organisations working with these target groups at local and national level. The project allows participants to engage in social interaction with people from The Student Hotel as well as the visitors and vice versa. Participants from Il Cenacolo are working side by side with the United Painting Crew to create a colorful project, that hopefully is the first of many more to come – both in Florence and all around Italy!